Woke up to a beautiful morning In Giles’ quay near Carlingford, with an orange glow over the East, in a brilliantly clear sky. The temperature was warmer than the close to zero recent dawns also. Getting a lift over to race start I could see both the Cooley mountain ranges on either side of Glenmore were crystal clear and looking splendid. The race route involves an off-road traverse of both ranges: bookended and connected by tarmac roads.

Lots of people were milling about at the meeting point at the Foy centre in Carlingford at 8:30, half an hour before the race briefing. I had registered the evening previously, a quick no-nonsense 2 minute affair meaning all I had to worry about this morning was listening to the race brief and boarding the bus.

I had driven the final few kms of the route after registration and now I had time to stretch the legs and jog back up and down for another look. There was a very slight difference to the normal route I’d be used to coming down for the last 2km: for this race we used a trail to duck behind the church. Truth be told the roads were so well marked: with a mark indicating a turn was being approached and another mark at the turn, that going wrong wasn’t likely.

Good friendly instructive race briefing, Half marathoners were instructed onto the bus (there was a 10k race also), buses were checked for stray 10kers and off we went to Lumper’s pub in Ravensdale.

We arrived there a good 30 minutes before race start. Again this was flagged on the website so I knew there would be adequate time for a warm up. There was a facility, flagged also, to leave a bag in the organisers van for transport back to Carlingford. The temperature was warming up, so I decided it was warm enough to race and warm up in my singlet and dropped the bag in the van at that stage.

The race started on the Ravensdale Rd North of Lumper’s and headed south for about a kilometre before taking a left at Lumper’s onto a boreen and a slight incline. After most of another km the road veered left and then we turned right onto a forest road and the first climb proper. A few km of forest road and things levelled out a bit. The course now took a detour on top of the open mountain. We ran 3 sides of a rectangle, long-short-long, on mountain paths before descending to Glenmore valley with 8.5 km achieved and a refreshment station signals were about to go back onto the tarmac. We now need to get across the Glenmore valley to the next mountain range and climb, and this is achieved by first going North 2km on to the Windy, at the gap the two ranges converge so then we run South on another Tarmac road for another 4.5 km to another refreshment station where we turn left and off-road for the second significant climb, 2km, to Goylan Pass. When we gain the pass its 4km down to the line, 2km off road and 2 km on-road.

I jogged off in the direction of the first forest climb during the warm-up. Jogged up a bit and ran down. Good to get those muscles warmed to the task in hand! A jog back past Lumper’s with a few strides and it was time to go. I was chatting to a big strong looking man called Maciej at the race start and he was hoping to go well. I was hoping to run under 90 minutes. I was 4 weeks back from an on-off, calf injury followed by 2 full weeks out with a cut knee.

Training was going better than expected though. I was starting to suspect I might be able to run closer to 85 than 90, and that would put me in with a shout of a top 3 finish. I am a fairly experienced hill runner, so with a 2km climb and 4km descent to finish I might have a good chance of taking a sneaky win in a close race if I was lucky enough that things panned out that way in the race. Best to have the head prepared for that to take full advantage, but primarily I was looking for, and would be happy with, a good run here. I wasn’t fit enough to go flat out over the distance, or to attack the first climb without losing significant time after. The plan was take the first climb steady, and start racing then. It’s actually probably a good strategy for any longish hill race with more than one climb. 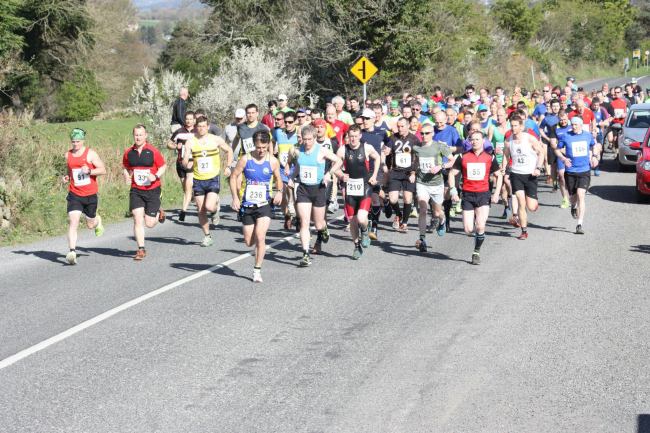 Anyway, off we went. I wasn’t going to lead or push the pace under any circumstances. Nobody else was either it seemed, so the pace was steady enough, a Newry City vested runner taking it out as far as Lumper’s. Around there a strong looking guy in Tri Rig-out took the lead (later discovered his name is Shane Tobin, a local Glenmore Athlete). Tri Athlon guys are dangerous. The cycling strength gained directly helps climbing strength. The nature of Tris/duathlons means they are running hard after fatiguing these muscles cycling, developing strenght endurance for flat running too….exactly the attributes that this race requires.

I was sitting in about 4th and keeping it steady. As we turned off road Shane started working into his climbing rythm and pulling away. Maciej went after him, and myself and another guy (Graham Hopkins) climbed steadily in 3rd and 4th. Grahams pace looked strong and under control. I got into a good rhythm and took 3rd after a few minutes. At this stage the race was between the 4 of us I felt, as we had a sizable gap back to 5th. I saw I was gaining on Maciej and opening a small gap on Graham. I sensed Graham wasn’t tiring but just running at a sustainable pace, as I was. I had a bad feeling that the leader was doing likewise.

I passed Maciej and could at last concentrate at focusing the evil eye on the race leaders back. To keep me focused I started taking time checks on the gap. He passed a bush: take the time….check when I pass it….35 seconds. I also knew the elevation of the 2-3 high points here. With elevation displayed on my GPS it easier to know how much climbing remains etc as useful to know if nor more so, as distance for these longish climbs. As the climb levelled out I took the time again….36 secs. Not bad..Keep it going, I thought. When we get to the open mountain stuff I should have an advantage…particularly on the down. We now went off forest road on the first long side of the open mountain rectangle. Sadly, from my viewpoint the leader seemed to take the rougher ground confidently. I kept the effort up, and we passed a mountain biker marshall at the end of this side. I asked him the gap, he said 34 secs and I was happy with that. I’m ashamed to admit I hadn’t been taken Johnny McCabe’s pre-race instruction to plough through the first mud puddle. I had packed my brand new pair of racers; not the runners I had intended using but they were perfect for the course with decent grip. The only issue with them was that they were shiny and new! I assumed only the one mud puddle: I ended up skipping around 3, and the 4th one was not accepting any shortcuts so in I went. As a hill runner, I bow my head in shame…..should have ploughed through them all.

Anyway, before I knew it we were descending and the road was visible. I had gotten a little tired over the open mountain section and I could see the leader exiting onto the road at the refreshment stop, into Glenmore valley, in good shape with what looked like a bigger gap. A descent descender as well as climber. I took 2 cups of water, drank half of one and dumped the rest on my neck and head. Put the cups in the bin provided, (leave no trace!) and headed out onto the tarmac in pursuit. 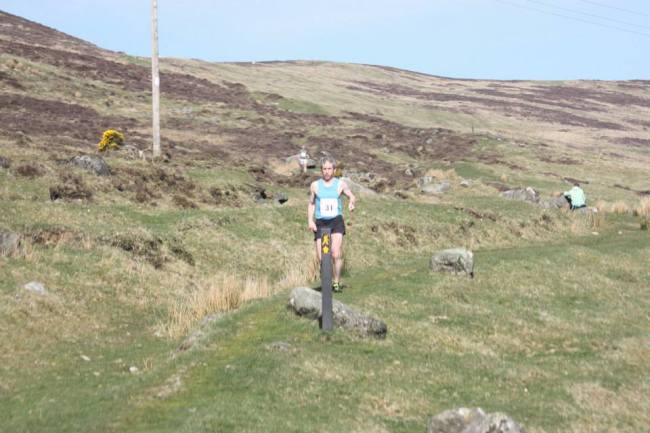 There is a few dips and climbs on the way to the Windy gap with little net increase in altitude. These were starting to hurt a little and I wasn’t able to really attack here as I had hoped. Another gap check put the deficit at 55 seconds and this was bad news indeed. I saw the leader turn at the windy gap and look over to check the pursuers’ positions. After turning myself, I tried to run as close to the red line as possible. Looking across for anyone behind me….I couldn’t see anyone at all back the road…just concentrate on the man in front so. If there was someone close behind at the pass I might not have seen them though……

I wasn’t gaining though and when we started catching 10k runners I started losing sight of Shane behind 10k runners. As we turned off-road at Goylan pass, although I was told the gap was only a minute, I felt looked more like 90 seconds. Again on the first zig and zag the leader was able to check the pursuit. I was still there, just about, but the race was firmly under his control. My plan was to get to the pass as quick as possible and descend all out to the line. A couple of minutes can easily be gained by a very good descent and anything can happen in a hill race. I struggled with the climb though; managing it in just less than 12 minutes…I was hoping for 11… I kept my promise and descended very hard…..the route descends through Carlingford Commons, north around a few large boulders before zagging back South. After the boulders I struggled over a rough section of a couple of hundred metres……looking up it was clear that the leader was off the mountain safely, a big lead still intact with only a mile or so of tarmac to negotiate to the line. I realistically had no chance anymore. I eased right back to steady effort in order to knock a couple of days off my recovery time. I covered my posterior by checking behind before each turn, as I went back on-tarmac and through the boreens above the town. Same strategy as entered Carlingford itself. I saw 84 mins on my watch and wondered if the leader had beaten the excellent record set by Ryan Maxwell last year.

I eventually made it onto the main street and crossed the line. I congratulated the leader, inquired after his time low-ish 83 and the record. I turned around and was stunned to see Graham Hopkins, cross the line less than 30 secs after me. I had covered myself and didn’t think I’d slowed down so much, but Graham had run what looked like an excellently paced race.

Maciej found some of the downhill sections tricky as a big man but reckoned he’d got great prep for a target Half Ironman.

The winner was delighted with his win and rightly so. A very solid run, clearly the strongest in all necessary aspects: uphill, down, flat and strength endurance…. and I’d imagine nothing beats winning your local race.

I’ll be back next year for another crack. Thanks to the organisers for the excellent considered organisation, humour, refreshments (well done Dan’s Café, super stuff) and above all the obvious emphasis on safety.

Great to have my wife Tina, young family and extended family in support including a few youngsters. Hopefully my nearly 3 year old daughter will get the bug if she sees enough races (or not!). My medium term plan is a sub 2:30 marathon attempt in Frankfurt this August. If I don’t make that target, it will be passed on to her. I haven’t told her yet.

2 thoughts on “Cooley Legends Half Marathon”